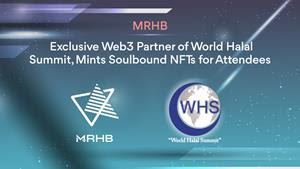 The World Halal Summit, taking place this year from November 24-27, 2022, is the largest halal conference in the world — the last World Halal Summit attracted over 31,000 attendees from 96 nations. The conference is held annually in Istanbul, Turkey, and focused on contemporary challenges and opportunities, including current trends and new directions in the halal sector.

“We are proud to be ‘Official Partner’ of the World Halal Summit this year,” said MRHB DeFi CEO and founder Naquib Mohammed. “There has been tremendous interest in crypto and digital assets by Muslim communities in recent years. MRHB is the world’s first Web3 platform offering decentralized financial services that are truly halal from the ground up and we are truly grateful for the opportunity to share these solutions with the community of the World Halal Summit.”

MRHB is minting NFT tickets which are soulbound tokens – non-transferrable NFTs that cannot be sold or traded with other people. Soulbound tokens act as identity and reputation tokens in a decentralized society.

To celebrate their newly launched commodities exchange TijarX, MRHB is awarding a total of US$10K in Gold Standard ($AUS) halal tokenized gold, backed by the physical gold bars held in the vaults of MRHB’s regulated (since 1974) bullion partner – Ainslee Bullion.