GUIYANG, China, July 13, 2021 /PRNewswire/ — From July 12 to 13, the Eco Forum Global Guiyang 2021 (EFG 2021) was held in Guiyang, southwestern province of China. The EFG 2021 is the only national-level international forum with the theme of ecological civilization in China. It has been held for ten sessions. With the theme of “Green and Low-carbon Development Fostering a Community of Life for Man and Nature”, the forum was held both online and offline. 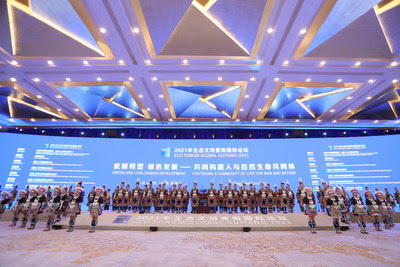 Performers sing grand song of the Dong ethnic song at the opening ceremony of the EFG 2021.

“On the journey of ecological civilization, China is undergoing a profound change in development concepts and development methods.” Li Zhanshu, member of the Standing Committee of the Political Bureau of the CPC Central Committee, chairman of the NPC Standing Committee, delivered in the keynote speech at the conference. He said that the growth area of China’s forest resource exceeded 70 million hectares, ranking first in the world in the past ten years. China has built the world’s largest clean energy system, with photovoltaic, installed capacity of wind energy and power generation ranking first in the world. “China’s modernization is a modernization of the harmonious coexistence of man and nature. We will uphold the concept of the community with a shared future for mankind and work with the international community to make positive contributions on addressing global climate and environmental challenges and maintaining the ecological safety of the earth.”